Warning: Use of undefined constant LVPISWP28 - assumed 'LVPISWP28' (this will throw an Error in a future version of PHP) in /var/syscpdoc/webs/markpepper/markpepper/wp-content/plugins/lightview-plus/lightview-plus.php on line 109 2009 | Mark Pepper

The work of the Rostock-born artist Mark Pepper shifts between installation, fiction and reality. In Augapfel, his first exhibition at Galerie M + R Fricke over a year ago, visitors to the gallery encountered a space that had been divided into two parts. One of these was inaccessible and hung with photographic portraits that had been manipulated in such a way as to render them unrecognisable. The other, accessible part was a white unfurnished room flooded with neon light. The entrance area and the floor were covered in black plastic sheeting while a sidewall was inscribed with a hand-written text – an allusion to human presence.

Unlike the first exhibition, as well as the architectural reconstructions Observation and Zerstückelung, the space in this exhibition functions as the model of a society whose thought and behaviour patterns are in some ways inverted. With the installation Friendly Fire, the thought and behaviour patterns of different complex social systems are, on the one hand, relativised, and, on the other, made to raise fundamental questions.

As a result, Friendly Fire extends beyond the limit of traditional thought constructs, and Pepper offers his alternative by having two toy soldiers, now enlarged in PET to life size, shooting flower buds at the model of a house. The central point of this work is the house, which is an exact copy of a house from a model railway blown up to the height of both “soldiers” appears repeatedly as an image from an image in the work of the artist. Pepper takes this parody to an extreme by transporting the house and its soldiers to an interior space. The artist offers no alternative models, but underlines the urgent need for new ways of organising and defining everyday life. By distancing himself from social constraints and developing his own terms, the artist creates a situation in which freedom as a state is able to acquire a new dynamic.

“The house as refuge, as symbol of wealth and prosperity, prestige and aspiration, is always good for Death and Victory.” (Mark Pepper) 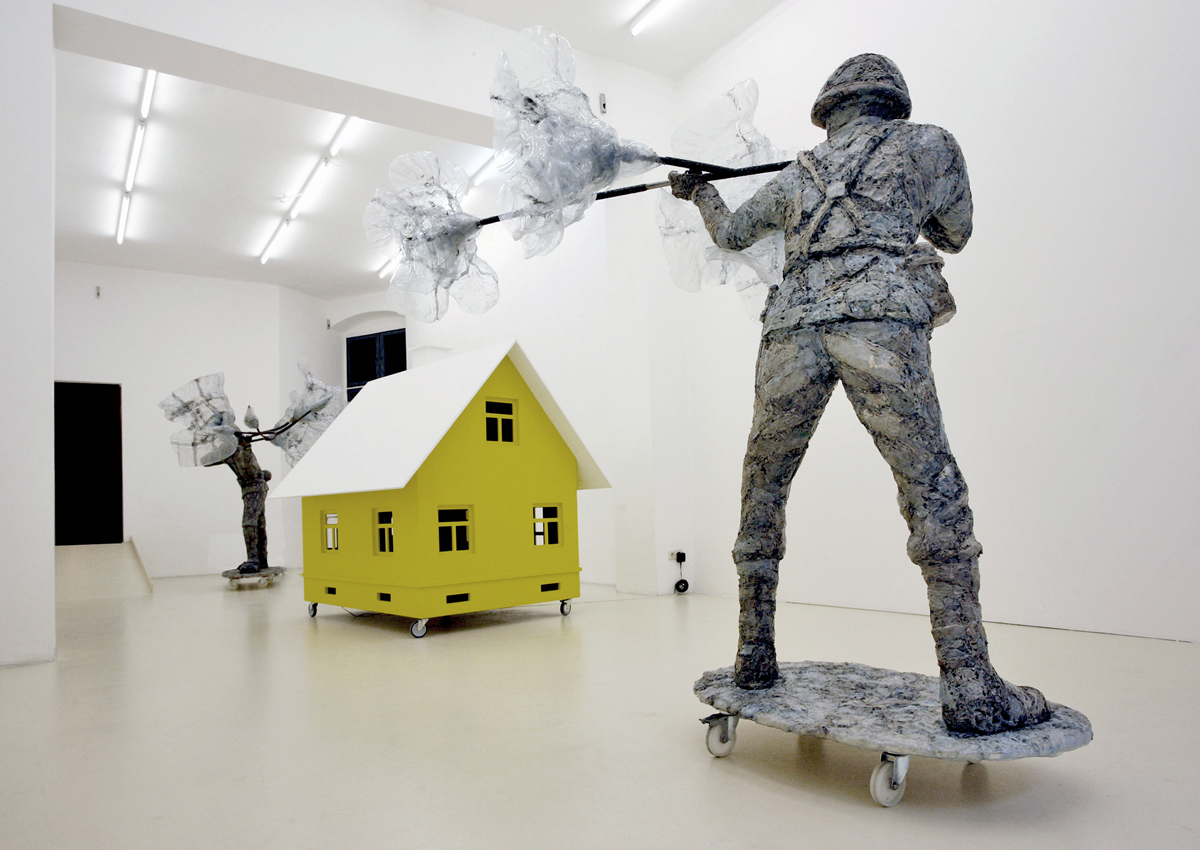